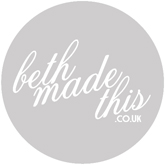 ​Beth Dawson is a silversmith, designer/maker and illustrator based in Leeds. Beth also works part-time as lecturer on the BA (Hons) Visual Communication at Leeds Arts University and as a tutor and course writer in Visual Communications (For Illustration & Graphics) at The Open College Of Arts.

She completed a BA in Graphic Arts in 2005 at Leeds Metropolitan and a Master's in Sequential Design and Illustration in 2012 at the University of Brighton where she won an AHRC research preparation masters scholarship for her study.

This is a temporary website, If you miss my old site, you can still find it here

THEN, NOW, AFTER, Grand Parade Gallery, Brighton University – Exhibition - Work included in 50 year retrospective of illustrators at the university